Would you believe it. A beautiful mild, sunny day all day, then when everybody met for the Calder walk last night Friday 27th April 2018, the heavens opened up. Right from the off, the rain came on, so it was absolutely astonishing that a brilliant turnout of 33 people joined in, comprising of members of Friends of the Calder, South Lanarkshire Council and local residents, some from as far as Hamilton.

A huge thank you to everybody for braving the elements. Everybody did truly get soaked and with these April showers prolonged for an hour, a few people did head off, in a particularly heavy torrential downpour. 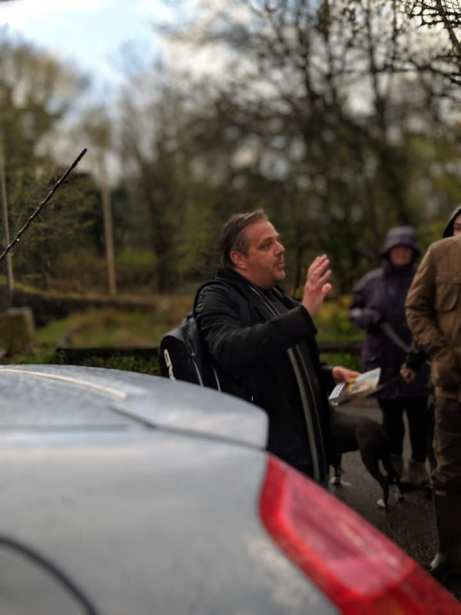 The free history tour, with local historian, Paul Veverka as presenter started off from the Hoolets and headed down the Pech Brae, towards Niaroo, Milheugh then back up again to Larkfield. They stopped off at each point of interest as little history secrets and information was offered.

The tour lasted 2 hours, (the first hour being in rain). Sheltering under trees at the pond, proved useless so everybody marched on. Then, in the second half of the tour, to everybody’s delight the rain passed, the sun came out and the evening ended with a beautiful sunset in the dry! It was welcome relief to everybody who braved the weather.

The little guidebooks as illustrations for the tour proved useful and everybody was allowed to keep them, a free gift worth £6 each.

Along the way, 3 local people were chosen at random to officially open the new paths at the Calder. Cara, Marie and Alan are pictured, who each got an ‘opening medal’ as a keepsake courtesy of Blantyre Project.

A big thank you to South Lanarkshire Council Rangers, Jo and Abi who also attended and for all the recognised hard work the Council have done in making this area more safe, more accessible and more beautiful.

25 people were still there at the end of the walk to enjoy teas, coffees and biscuits kindly brought along by Margaret Lindner. It was most appreciated too. Feedback was very positive and seems a good time was had by all.

This particular walk in will be repeated in late June (checking the weather forecast first!)

Can You Help Us?